This repository contains the sample code, solutions to the exercises and game assets belonging to the book “Learning C# by Programming Games”, second edition, published by Springer. 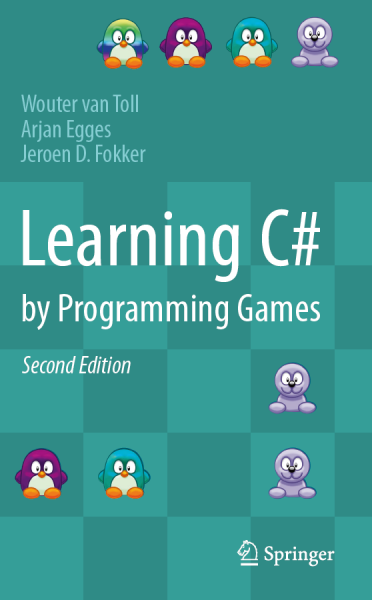 How to Get Started

Assuming you own a copy of the book, here’s what you need to do to get started with game development:

Once you’ve completed these steps successfully, you’re ready to enjoy the book to its fullest!

(*) Both Visual Studio and MonoGame receive new versions quite often. This is difficult for us to keep track of, especially with a printed book. We advise you to use Visual Studio 2017 and MonoGame 3.6, to be 100% sure that the example projects will run. If you really want to use newer versions, then you are free to do this at your own risk.

Contrary to most programming books, we do not organize the presentation according to programming language constructs, but instead use the structure and elements of computer games as a framework. For instance, there are chapters on dealing with player input, game objects, game worlds, game states, levels, animation, physics, and intelligence. The reader will be guided through the development of four games showing the various aspects of game development. Starting with a simple shooting game, we move on to puzzle games consisting of multiple levels, and conclude the book by developing a full-fledged platform game with animation, game physics, and intelligent enemies. We show a number of commonly used techniques in games, such as drawing layers of sprites, rotating, scaling and animating sprites, dealing with physics, handling interaction between game objects, and creating pleasing visual effects. At the same time, we provide a thorough introduction to C# and object-oriented programming, introducing step by step important programming concepts such as loops, methods, classes, collections, and exception handling.

The book is also designed to be used as a basis for a game-oriented programming course at university level. Supplementary materials for organizing such a course (including solutions to all exercises) are available in this repository, along with all example programs, game sprites, and sounds.

About the Second Edition

This second edition of the book includes the following improvements:

In case you need the solutions to the exercises or the set of code samples of the first edition of the book, you can find them in the legacy folder of the GitHub repository (github.com/egges/csharpgames).

Wouter van Toll is a post-doctoral researcher at Inria in Rennes, France, as well as a fanatic developer of games and apps. His research focuses on simulating the behavior of human crowds. Previously, he was a lecturer at the Department of Information and Computing Sciences at Utrecht University in the Netherlands. He has taught several bachelor and master courses there, including the introductory Game programming course designed by co-author Arjan Egges.

Arjan Egges is a part-time lecturer in the Department of Information and Computing Sciences at Utrecht University in the Netherlands. He has ample teaching experience related to games and computer animation, and he designed the introductory programming course for the university’s Game Technology bachelor program. Furthermore, Arjan is has launched a platform called Quarterfall, an ICT education tool for creating assignments for students with an automatic feedback mechanism.

Jeroen D. Fokker is an assistant professor in the Software Technology group at Utrecht University. As the director of education, he is responsible for the undergraduate programs in Computer Science and Information Science. He has been teaching introductory programming courses for over 20 years, using C++, Haskell, Java, and C#, as well as courses on compiler construction.

The contents of this repository, including all the code and the game assets, is released under the MIT license and as such is free to use for open source and commercial applications.

The example games in this book use the following music pieces:

The music is available on Incompetech and it is licensed under Creative Commons: By Attribution 3.0.